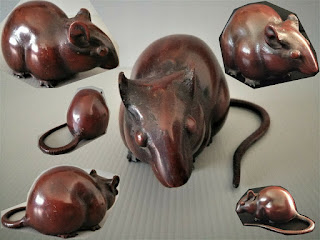 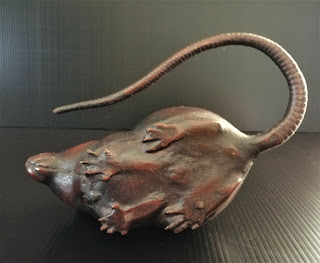 This cast iron Japanese okimono of a mouse (or rat) is about 6.2" (16 cm) long x 2.75" (7 cm) high x 3.75" (9.5 cm) wide and weighs in at about 21 ounces (600 grams). It was acquired by a collector about 30 years ago and has quite a bit of wear to the finish and the casting is not perfect but there is no real damage and it was priced accordingly. It is not known if the collector purchased it when it was new or used. It is not marked and did not come with a tomobako but was part of a large collection of Japanese metal, porcelain and pottery art from a collection being sold. Just a Hail Mary in case anyone recognizes the work of this artist.

This makes me blue!

This bottle/vase appears to be a fairly early piece of studio art glass and is about 5.5" high x 4" in diameter and weighs 1.25 lbs. The pontil is a bit unusual. There are some marks etched on the bottom which appear to be initials and a year (L O 73) and maybe a catalog or inventory number (4 73 - 42). The latter could be "April 1973, 42nd piece made in that month". Maybe the work of an actual studio art glass artist, not a student. The "inventory" number could also be part of an inventory system shared by several artists in a studio, hence the relatively large number, 42, or maybe that is not too much for a single studio glass artist to produce in a month.

All guesses on my part as to what these numbers and letters are and may have meant. Also, note the line in the middle of both number 7s. That is not commonly done in the U.S., so this could be a European piece.

I think the year 1973 was still fairly early in the Studio Art Glass Movement, which started about 1962 in the U.S., and which might help to identify the artist or studio as there were a relatively small number of artists in the Studio Art Glass movement at this time. I'm not sure how widely the movement had spread by 1973, but it is a potential research opportunity. I picked this up from a seller in Kansas, which might also be a clue. Input on any of my assumptions welcome. 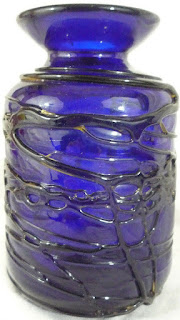 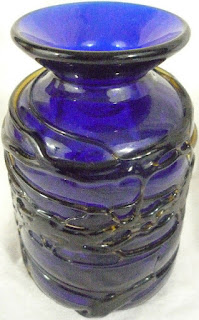 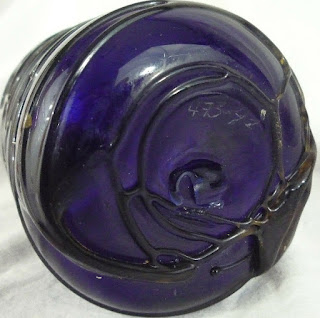 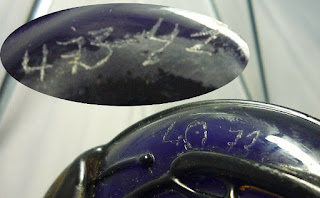 Can you handle this?

Here is a little jug with handles. No maker or label. What is odd about it is that the exterior is a sort of scavo glass in blue, with a cased orange interior and clear brown glass handles. Very odd combination. Some have suggested Lafiore of Mallorca as the maker, but I have been unable to confirm or refute this. Opinions welcome! Thanks for looking! 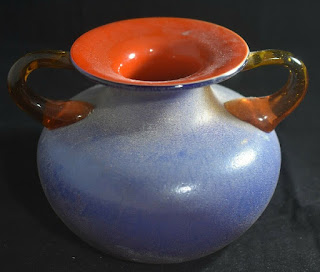 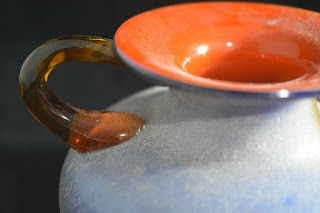 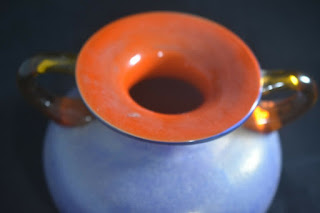 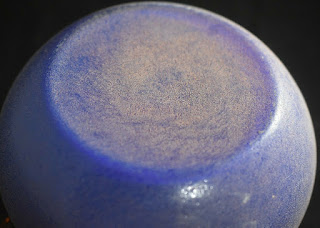 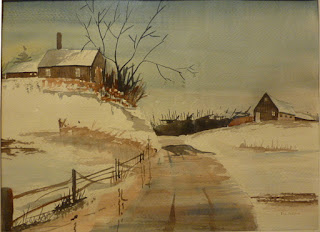 A thrift shop find. There is a month/day/1977 notation on the backing of the painting. Found in Bloomington, IL. I could not find any information about this artist after a quick search. Nothing in the work that really suggests a location. Could be Midwest or New England. 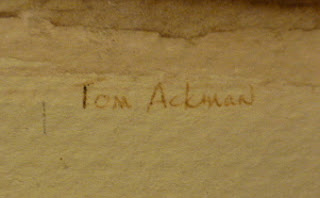 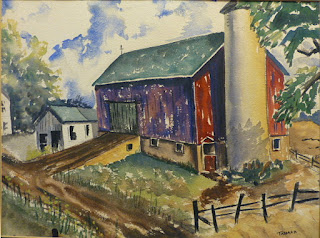 I thought this would be an easy one since the artist seems to have been fairly accomplished, though his/her color choices are a bit wacky. I found this in a thrift shop in Urbana/Champaign, Il. It was rusticly framed and had a dark green mat. Once I took a closer look at the signature, though, I realized that the third letter seems to be stylized and might represent two letters, possibly,IH, HI, LH, HL, etc. Not so easy after all! Help me! 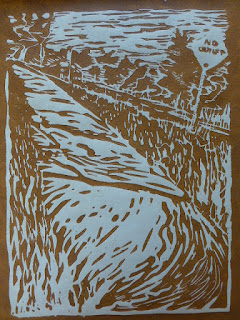 This was a $.25 thrift shop find. It was framed in a generic oak frame and the backing material showed lots of paint and ink stains,like it been lying on an artist's work table. Guessing the artist recycled an 8x10 frame and mat for this piece. It is marked "AP", for artist proof, titled and illegibly signed, verso. I am more hopeful that someone will recognize the print than the signature. I think I have seen this print before. The signature looks something like "G Anl...e"? 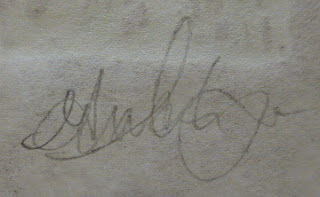 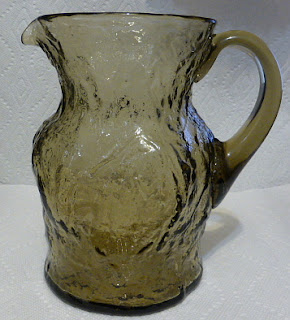 (MYSTERY SOLVED. See bottom of post.)This unmarked pitcher sat on a shelf for weeks at a local thrift shop that normally turns items over in a few days, at most. It was marked $2.99. Items that don't move quickly enough are relegated to a "Shelf of Shame" where the price is cut until the item sells or I guess it becomes landfill. Despite living in the shop long enough to grow roots, it never migrated to the dreaded shelf, though, I think because it is so obviously a good piece. It weighs about 5 pounds, I would guess. It is hard enough to manage empty and I think one would need to be a body builder to pour from it one handed when full. Probably why it didn't sell. It looked like a Blenko pitcher to me, based on the color of the glass (Yeah I know that several glass makers bought glass blanks from the same sources). I finally couldn't stand it any longer and, with my veterans discount (sweet) put it out of its misery and paid a whopping $2.64 out the door for it. 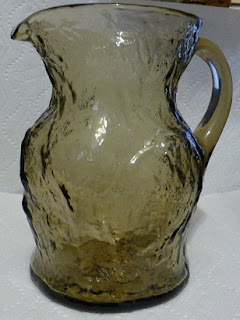 I was convinced that I would get home and look through images of Blenko pitchers on ebay and there it would be. Nope. Sigh. Then I branched out to other makers. Re-nope, Re-sigh. Then just art glass pitchers. Re-re-nope, Re-re-sigh. 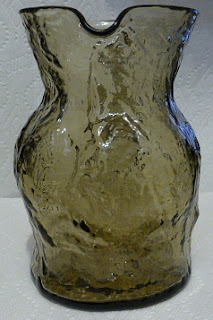 I feel sure that this is a an American art glass piece, not Italian, etc., or "shudder" Made in China. It is so unwieldy that I am not sure that it is meant to be used, or if it is, only with two hands. 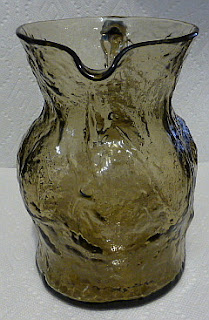 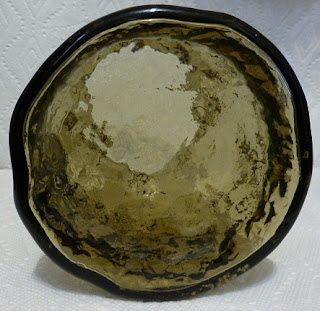 Even the bottom is textured. Not sure how this piece was made. I ruled out Pilgrim as maker, since there is no "strawberry" mark. There is no noticeable wear to the bottom, so it is either not too old, or was very gently used. 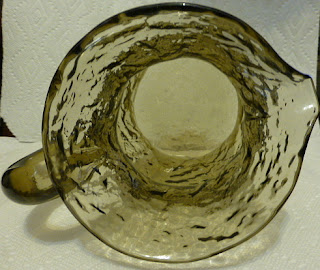 There is an annoying lip around the inside bottom that had collected a couple of grunge spots and after trying to remove them by hand, I finally gave up and soaked the inside in vinegar and water until they could be removed. 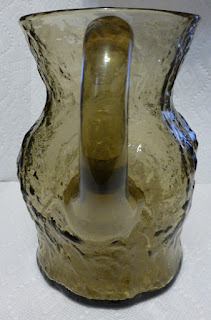 Yep, the handle is crooked and I think this may be intentional. I am a lefty and it felt awkward in my left hand, but as soon as I switched to my right had it was comfortable to hold. Maybe a coincidence? There is a suggestion of a mold line to the right of the handle, which can be seen and not felt, and some roughness on the neck of the pitcher where one would place their hand to support pouring from it. The roughness does not go around the whole neck, only for a few inches on either side of the neck. Not sure if this is wear from use or if it was made this way. I might be imagining the mold line... There should be a corresponding mold line on the opposite side of the pitcher, if it was made with a two piece mold, and I can imagine I see one there if I stare at it long enough. So maybe a molded piece? If so, a lot of care was taken to remove any mold lines. 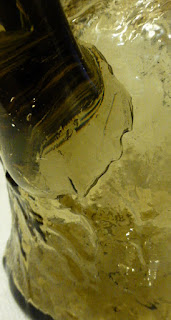 Several shots of the join of the handle to the body. It doesn't look familiar to me.... 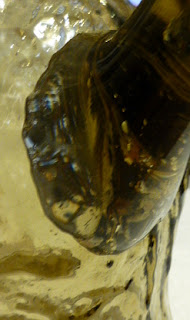 A real elephant foot join at the bottom of the handle. 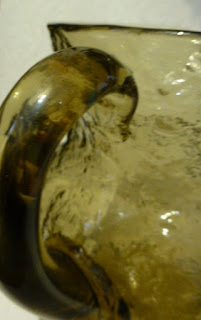 If we can't figure out who made it, I think that I will be buried clutching this pitcher to my chest as revenge against any archaeologists who tamper with my remains.

Morgantown Glass Works operated in Morgantown, West Virginia, from 1900 to 1974. Some of their wares are marked with an adhesive label that says Old Morgantown Glass.  This is an example of 'Crinkle' c1962; AKA: Ockner. A companion pattern called 'El Mexicano' was made using opaque glass.

Mine is about 56 years old and is in mint condition. I guess being too heavy to use preserved it.

kwqd
Central Illinois, Illinois, United States
I am an art collector and art historian. I was a professional in electronics and computer science related fields for several decades before realizing that I really enjoy art in several mediums. I have also been a genealogist for several decades, so now I merge my interests in technology, art collecting and genealogy by collecting art, researching artists and making my collection available on line. Click on the link to my art collection web site, above, to see my collection. I graduated with a masters degree in Library and Information Science from the University of Illinois at Urbana Champaign in May 2014, focusing on art cataloging. At some point in the future, I had intended to become self employed as an art appraiser and cataloger and was planning to enter the fine art appraisal program at NYU. I was accepted into the program but, after some further thought, I decided to not turn an enjoyable hobby into work and am just going to enjoy being retired, become a burden on society and selectively collect art, instead. Thanks for looking at my blog!